Below is a redacted copy of the reply to my request for factual evidence regarding the unreasonable behaviour policy imposed by Martin Samuels (Director for adults and wellbeing at Herefordshire Council).
Those reading the response will note the avoidance to provide evidence of claims made by Mr Samuels. To date, my vulnerable brother remains denied his statutory and mandatory rights, with reported recurring and ongoing concerns of negligence, neglect and institutional abuse disregarded; As an unpaid carer and interested party in my brother’s health and wellbeing, such is concern itself.


In the interest of transparency, I also provide below the messages that were sent via Facebook to the careless social worker EG, who had left the service almost one year before the policy being imposed by Herefordshire Council.
I also provide the short message during the same time to the staff member SC, a friend of the negligent social worker, who made false allegations, threat and defended the provider during 2016-2017. Please note the date in the message should, in fact, be 14th September 2016 and not 2017. 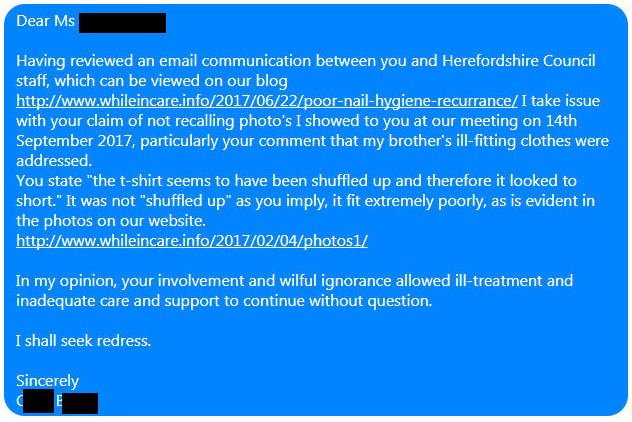 I have copies of both individuals inappropriate social media posts.