Below is one of my brother’s previously appointed social workers EG’s emails to the manager of H House, which was redacted when I received it. 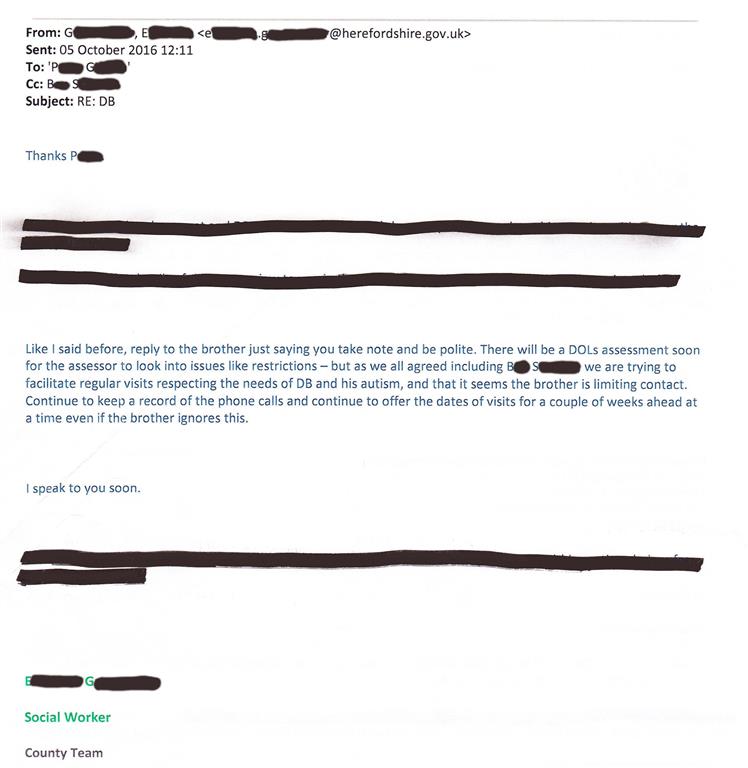 I was able to un-redact the information and found it said the following.

Lines 1 & 2
I have reviewed the placement & DB’s care needs and I don’t have any concerns about him staying with you or the care you provide.

This line is very concerning, the social worker appearing to be wilfully ignorant of what she had seen (images of which are at the bottom of this page), what I had reported and the bullet points provided at the meeting of 14th September 2016. Further. The email was sent only four days after a trial period that I was forced to make a compromise for, of how we lead our private and family life, was due to start. Broken shortly after the meeting when the provider’s managers PG and SS did not send me a monthly schedule as agreed and their neglect to contact my brother’s G.P. concerning medication and administration.

Line 3
I will send out the details of the care review to you in the next few days, am just waiting to get them signed off.

I believe the line refers to a document I received that appeared to be created in a rushed manner and contained inaccurate information, such as stating “We all agreed that DB has no mental capacity due not being able to demonstrate that he can understand. I do not agree and have never said that my brother has no mental capacity, only limited capacity. EG’s inability to communicate with my brother or understand him evident when I spoke with her.

The main paragraph of the email
You will note that the social worker EG implies there are restrictions imposed on my brother, which a DoLS assessor JJ will be looking into. To date I have not been made aware of any lawful restrictions imposed on my brother, only restriction for the convenience of the home and its staff. Further, I take issue with the social worker’s EG allegation that I am the one who is limiting contact with our family and me.

You will also note the social worker EG claims that it was agreed to facilitate regular visits respecting my brother’s needs and autism. This I find offensive to my brother as his disability has been used as an instrument to restrict him for the convenience of the provider. The social worker EG, advocate BS, home manager PG and regional manager SS only allowing my brother home if it was convenient for the residential home, and not when he wished.
I emailed the provider’s solicitor MD for the telephone call logs from H house to our phone number for the period 15th May 2015 to 24th April 2017. To date, these logs have not been provided; I believe this is because they will conflict with our telecoms provider logs of calls we have received.

Lastly, you will note we are only allowed a visit that has been arranged a minimum of two weeks in advance, that is suitable for the provider, regardless of when my brother wished to visit, or his family requested. It increasing to a months notice for a home visit at one point.
Not only does such deny my vulnerable brother of his choice and statutory rights, but in my understanding of the law, it also imposes an unlawful restriction on his family.

Last line
And Pls update me on purchasing additional clothing with him and also menu plans for healthier eating choice for our records thanks.

My request for a larger variety of clothes for my brother, to date, ignored, as has been my request for a dietician. EG ignoring his increase in weight by five stone and his mandatory right to support and treatment. The advocate claiming he had lost three stones, when in fact he had put on five stones, in my opinion, negligence which has affected my brother’s health adversely.

Since EG’s email of 5th October 2016 the care review was first abandoned without my knowledge, and a second care review did not take place after I requested to bring with me a solicitor, EG moving to Gloucestershire County Council and leaving my vulnerable brother  to suffer further institutional abuse.

I believe there are areas of The Social Workers Code of Practice that EG wilfully ignored or was negligent of, particularly as social workers should not collude with the erosion of human rights or allow their skills to be used for threats to family life of those in vulnerable positions.

Further, The Social Worker Code of Practice says social workers should be prepared to be accountable for and justify their judgements and actions to people who use services, the general public and employers.