After I had received the above acknowledgement letter from SM of Herefordshire Council Safeguarding, there was a seven-month delay for a meeting, which was held on 14th September 2016 to address the recurring and ongoing poor care and support of my brother, which included breaching his and his Mother’s Human Rights.
At the meeting, I attempted to represent my brother’s best interests,  with the advocate, who I later discovered had been negligent in their duty.
The social worker EG at the time accepted the advocate’s BS incorrect statements as truthful and accurate.

Below is the document I provided to the social worker EG, advocate BS, manager of H House PG and regional manager for The Priory Group SS.


During the meeting, I noted a lack of challenge towards the provider’s regional manager SS and home manager PG, in particular to the use of Diazepam for none therapeutic reasons.
I provided a document showing the deputy manager RM had stated that Diazepam had been used to control behaviour.

I then explained, to all present at the meeting of 14th September 2016, and showed the specific legislation that states medication cannot be used to control behaviour.
I quoted “Where a person is medicated to enable an indictable offence to be committed, section 22 of the Offences Against the Persons Act 1861 may be relevant. Where a person is medicated or over-medicated for non-therapeutic reasons, such as to control their behaviour, a number of other offences may be relevant, such as unlawfully administering medication contrary to section 58 Medicines Act 1968, or failure to comply with conditions contrary to section 24 of the Care Standards Act 2000 or contravention of Regulations contrary to section 25 of the Care Standards Act 2000.”

Below is part of a DoLS assessment document, where the deputy manager of H House RM states Diazepam had been used to control behaviour:

Offences Against The Persons Act 1861

After I detailed the misuse of Diazepam to the professionals attending the meeting in September 2016, EG social worker, BS advocate, SS regional manager for Priory Group and PG H House manager, not one of these individuals reported the offence.

As the email below, which I received from SS regional manager of The Priory Group shows, SS neglected to investigate the misuse of Diazepam adequately, selecting to word the email to avoid the dates the drug was used to control behaviour, and advising management of H House to have RM the deputy manager’s statement changed in the DoLS record. I believe an attempt to protect a colleague from being held accountable for the misuse of medication. I possess recordings and document where medication has been inaccurately recorded and administered.

You will note the 2nd paragraph of the email admitting the Diazepam was prescribed for a twitch, which conflicts with DoLS statement made by RM.

At the meeting in September 2016, I requested formal consent for the administration of medication to my brother, I showed SS and others, the latest available (revised) web page of the particular section of The Medicines Act 1968 F4 (2) (b)

You will note in the 3rd paragraph of the email SS wilfully neglected to contact my brother’s G.P., as was agreed at the meeting in September, to arrange formal consent for medication administration, as is a requirement by law, regardless of any company policy. I arranged the requested formal consent myself.


Paragraph 4 refers to denied Birthday at family home, paragraph 5 refers to a missing document originally supplied to H House by me.


In response to my letters and email, I received an email with the below letter from SC attached


I then replied to Ms SC’s questionable letter, as below

My reply to Ms SC’s letter


Those reading the following chain of communication will, I believe, note much inconsistency, contradiction by SC in the letters and emails, including allegations. I have included a screenshot of the properties of the original document where it clearly states the author is SH, as I wished to know their involvement with my data. 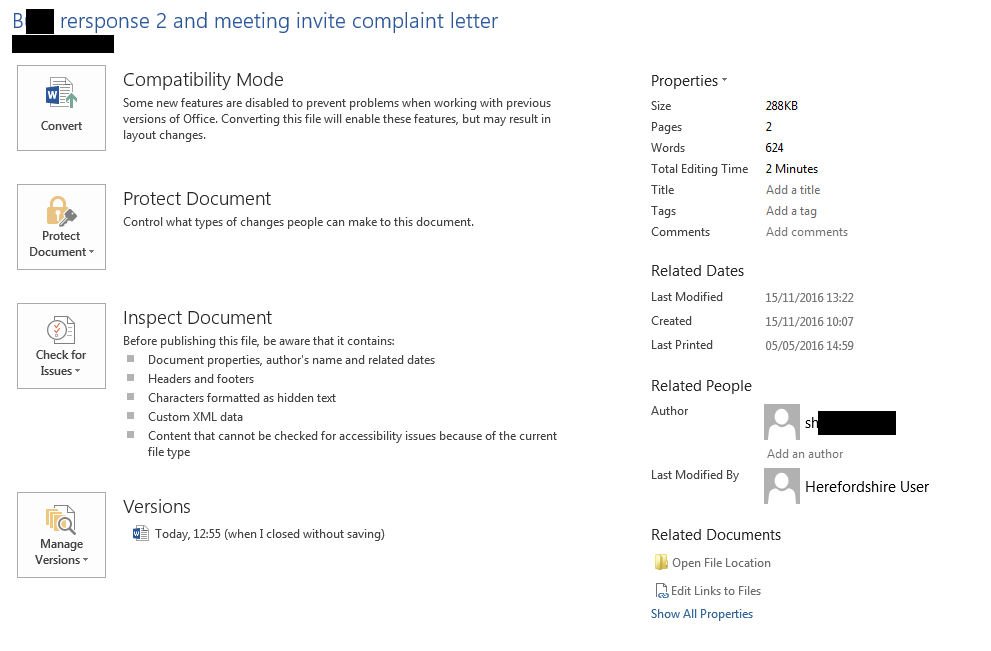 You will also note Ms SC made an allegation against my brother’s G.P. which I took issue with and requested she apologise to the G.P., my brother and me; to date, my brother nor I have received a formal apology from SC or Herefordshire Council.


The email I should not have seen


I then addressed the wrongly received email from SC


I replied as follows


To date, the inadequate care and support of my brother continue, as is evident in documents and photographs, and is ignored by Herefordshire Council staff who have not challenged the provider’s ill-treatment and neglect of my brother.

I believe that organisational and institutional abuse is standard practice when it involves vulnerable people and their poor care and ill-treatment, the local authority conspires with a provider of inadequate care and support to neglect and attempt to cover up concerns with the provider’s best interests as the primary priority.