The below is a screenshot of the ninth request to allow my brother home; you will note the tracking information, on this occasion that it was viewed by The Priory Group complaints email address yet ignored. You will also note for the purpose of checking evidence of view count I removed my personal privacy and security settings, then accessed the same sent email using my browser, allowing the continuation of tracking information and a further two views. Such clearly displays emails are seen by The Priory Group but wilfully ignored, denying my brother of his statutory right and valuable time with his elderly mother on Mother’s day. 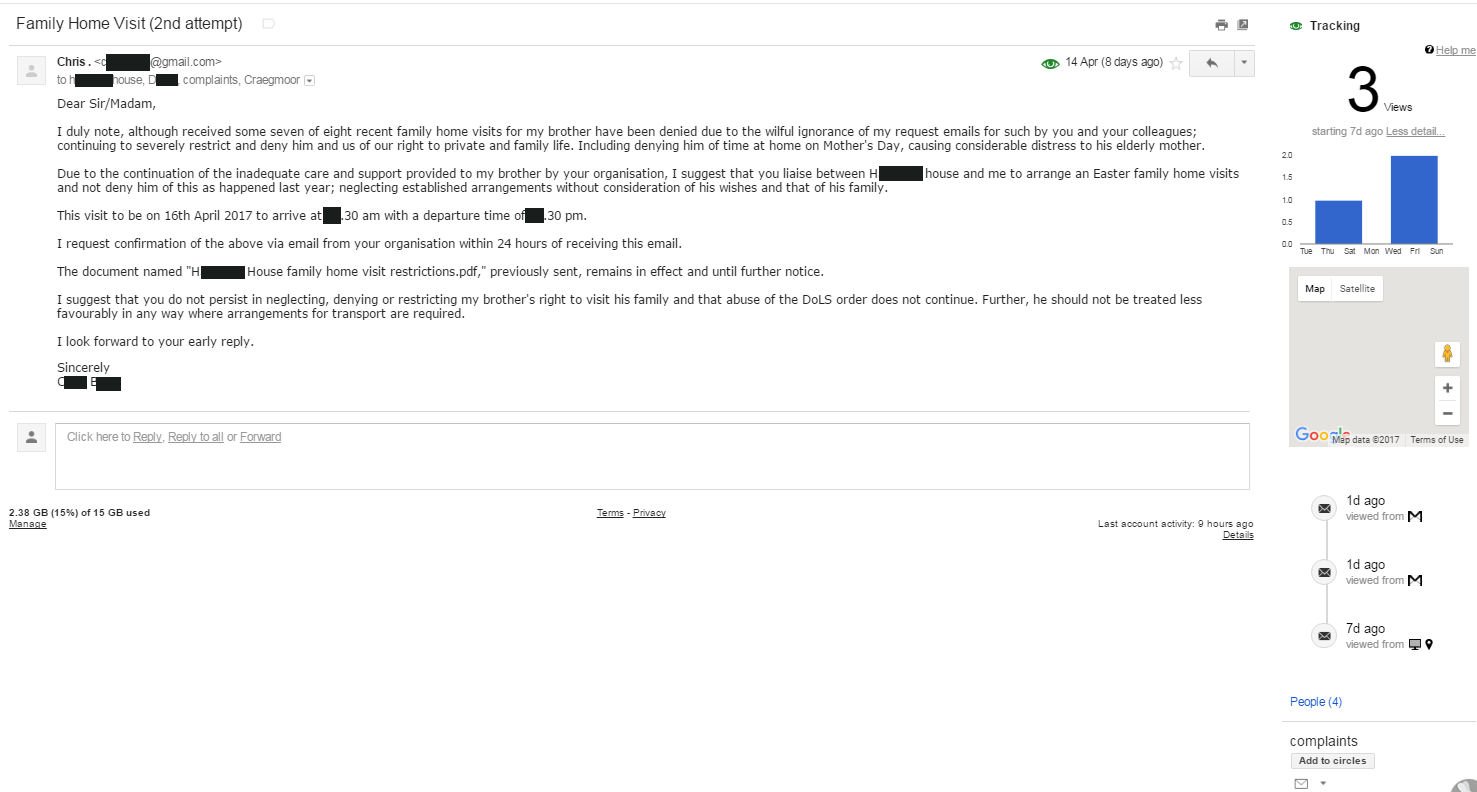 After the neglect to address our email request to allow my brother home for Mother’s Day, as he had always done every year until being placed in H House, I sent a tenth email requesting that my brother was not denied the long-standing planned Easter weekend visit, as he was in 2016, last year.

Below is a screenshot of the email which I sent to the Priory complaints email address, and which I later forwarded to my brother’s social worker. Although viewed by The Priory Group complaints address, as displayed in the tracking information, it was again wilfully ignored, and as such he was denied the established Easter celebration at home with his mother for a second year, denying him once more of his statutory right without consideration or any given reason to his family.

I firmly believe the continuation of such wilful ignorance by those involved with providing my brother’s inadequate care and support,  including provider staff and some Herefordshire Council employees, is just one identifiable example of organisational or institutional abuse.

Regardless of Ms JS, a team lead at Herefordshire Council, letter saying a social worker is not able to directly respond to complaints or concerns about the provider, I contacted the newly appointed social worker via phone to inform them of this tenth wilfully ignored request for my brother’s home visit.
As mentioned I sent an email with an attachment of the original sent email to The Priory Group addresses with tracking information for proof of viewing. The social worker kindly arranged the requested, and long-neglected visit home, for the next day.

As a side note, Ms JS letter is exactly 329 days after the written acknowledgement I received of the safeguarding concern, 139 days after the spurious meeting of September 2016, where the former social worker was biased toward the provider, not having my brother’s best interests as the primary concern, and a further three months since my brother was appointed the new social worker.